State Testing Mini Rant That Will Probably Turn Into A Maxi Rant, But Not A Maxi Pad, Just To Be Clear...

OKAY.  This effing state testing thing is just for the danged birds.  Today, The Preteen has the writing portion of the test, and she is freaking out BECAUSE, if they score a 5 or a 6, they've been promised a party.  Okay, I'm all about having a party, but can you wait until after shit is over with to celebrate instead of putting pressure on the kids to perform?  They actually FILMED A SCHOOL COMMERCIAL to play before the test this morning on how to relax and "YOU CAN DO IT!" and shit.  I'm just kind of flabbergasted about the whole deal.

Now, state testing is nothing new to this family - in second grade, her teacher told the class that they "had to do really really good or the school wouldn't get any money from the state."  Are you KIDDING me?

This teaching to the test thing is repulsive.  So is requiring Kindergarteners to be able to tie their shoes, know the alphabet, and be able to count to infinity before enrollment.  I could read before Kindergarten, but that's because Sesame Street was my babysitter.  I just think it's bullshit that preschool is becoming a prerequisite rather than an option.  We probably will do a year of preschool, just to ensure that I'm not raising a feral child (sometimes I wonder), but I just don't think it's NECESSARY.  Kindergarten is supposed to be about ABCs, 123s, paint smocks, snacks, and naps.  Fifth grade is about learning how to be a complete snot to your parents, insisting they're stupid, and doing math that your parents didn't do until college.

Kelly
In pursuit of happiness. And booze. 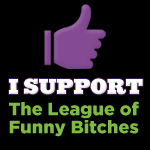 Even though I'm not a member, I show the love.